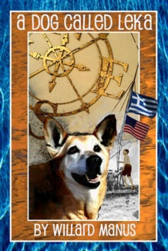 Ben Edgeworth is an eighteen year old American boy who is living in Greece and working in the shipyard. Leka comes to Ben as a hungry stray, searching the shipyard for scraps of food. Leka quickly proves himself to be a faithful companion in an extraordinary adventure through the Greek isles on a catamaran built by Ben himself. Together they encounter and overcome danger both on the ocean and on land.

ACCLAIM FOR A DOG CALLED LEKA

"It's been a long time since we have been able to view a story as heartwarming as Lassie. Enchanting and remarkable." Armchair Interviews "A novel rich in adventure and brimming with that priceless communication between a dog and his owner. It's Leka who steals hearts and stands out..." In the Library Reviews "For kids who love adventure stories and animal stories, this book is highly recommended: with fast action, lovable characters, and an exciting plot." MyShelf.com

AWARDS FOR A DOG CALLED LEKA

Willard Manus was born and raised in New York City but lived for many years in the Greek islands, mostly in the village of Lindos, on the island of Rhodes. His experiences there were published in a memoir, This Way to Paradise--Dancing on the Tables. While living in the Aegean, he also wrote novels, plays and articles--and learned how to sail and spearfish.