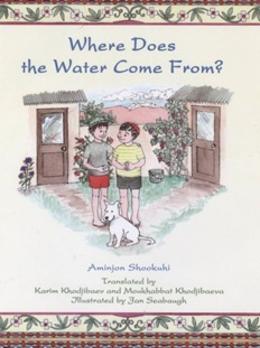 From renowned author, Aminjon Shookuhi, comes the story of two boys who live in the small village of Laklakon. It is July, the hottest month of the year in Tajikistan, the country in which their village lies, and Asad and his friend Samad are waiting for the water to fill the canal outside their homes like it does everyday. Just yesterday, the water flowed freely, clear and cool, inviting them to splash and play under the afternoon sun with Asad’s dog, Kalta. But they can’t understand why the canal is now dry, and all they know is that they’re getting very hot and impatient. Not wanting to wait for the water, the boys decide to follow the culvert to its end and release it themselves. But this task is not as easy as they might think and their quest to find the source of the water leads them to explore many neighboring villages, fields and orchards. As they make their way from place to place, they meet a variety of people who guide them on their journey and in this process, the boys learn a great many lessons, such as what kinds of fruits and vegetables grow in their region, how to distract a bull who is about to charge, and why they should never try to scale a walnut tree in the hopes of seeing a nest of baby birds.
Replete with charming and colorful illustrations as well as Tajiki folk songs and poems, this wonderful book is the first part of a trilogy and is set in the author’s home village. It not only looks at children’s inherent curiosity and the desire to explore their world but through this fascinating and delightful narrative, the story teaches children about the environment and its delicate balance.

Aminjon Khodjibaev, better known by his pen name Aminjon Shookuhi, was one of Tajikistan’s most prominent writers. Making his debut in the early 1940’s he was best known as a poet, but also found fame as a novelist and dramatist. His vast works include several collections of children’s poems as well as a trilogy of children’s books known by the title of its first book Where Does The Water Come From? He was named “National Writer of Tajikistan” after his death, and a statue of him stands in the schoolyard where he studied as a boy.

Karim Khodjibaev, the author's son, is a professional linguist who works in the field of adult education and language research. Some of his early publications are related to the socio-political dynamics of Central Asia. Khodjibaev holds an M.A. in Linguistics and is a certified translator and interpreter in several languages.
Moukhabbat Khodjibaeva is the daughter-in-law of the author. She holds an M.A. in Cinema Arts and an M.S. in Information Technology.Moukhabbat works in the field of Eurasian studies and has written several articles dedicated to the history of women's life in that area.

Jan Seabaugh is a teacher, poet, writer, and illustrator. She received her Ph.D. in Humanities from the University of Texas at Dallas and currently lives in South Bend, Indiana with her husband, Alan.

Where Does the Water Come From?